Hello Friends!  We’re working on the desk.  No, really, it’s almost there — and by almost there I mean I’ve almost put the whole post together.  At this point the desk has been LIVE and in action for a crazy-long time and I’m just a terrible blogger.

BUT — while coming up with this wonderful work-space, I wanted to do a few things that would help make it look clean – like hiding the wireless router.

This.  THIS IS A NIGHTMARE!  Cue the psycho shower-scene music! EEK!  ….but what you can’t quite see in all that MESS is the wireless router.  That’s NOT because it’s strategically hidden here.  It’s because that lamp is covering most of the cords and electronics on the shelf, and the main unit is behind another pile of junk on the desk itself.

So, ya know, just pile all your crap on the desk and you won’t see the messy cords for the rest of the mess!  Problem solved!

…. ok, not really, but the solution to the problem was there in the mess!

So the solution we found?  A Magazine box.  This particular one was $4 at wal-mart for a 2-pack.  They come flat and you pop them open to assemble them — and they snap together.  The bottom of the boxes can easily be altered — to allow cords to freely exit the bottom of the box without being a mess!

So just poke a hole in the bottom (you can see light coming in from the bottom of ours in the above photo where the cords sneak out) and then arrange the router and cords in the box so they’re not seen.  BUT, while they’re out of sight, they’re not OUT OF AIR — routers get surprisingly HOT and need airflow to keep from over-heating.  The magazine box approach is not closed like some of the cool carve-out-a-book solutions, AND the antennae of the router can still be left up.  That means the device can function better, without having the signal blocked.

All we had left to do after setting the router in the box and feeding the cords out the bottom, was to label it! 😉

You’d have no idea the router was even there — if it weren’t for that handy label that is!

So how do you hide your ugly devices?

One thought on “How to Hide a Wireless Router” 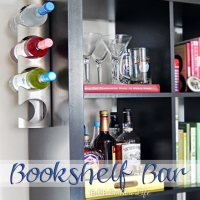